The Machine:  Bride of Pinbot is a pretty neat early WPC title from Williams.  It was the last alphanumeric machine produced by Williams.  This one was overall in nice shape and had a lot of potential.  The main problem was dirt and the typical cracked ramps. 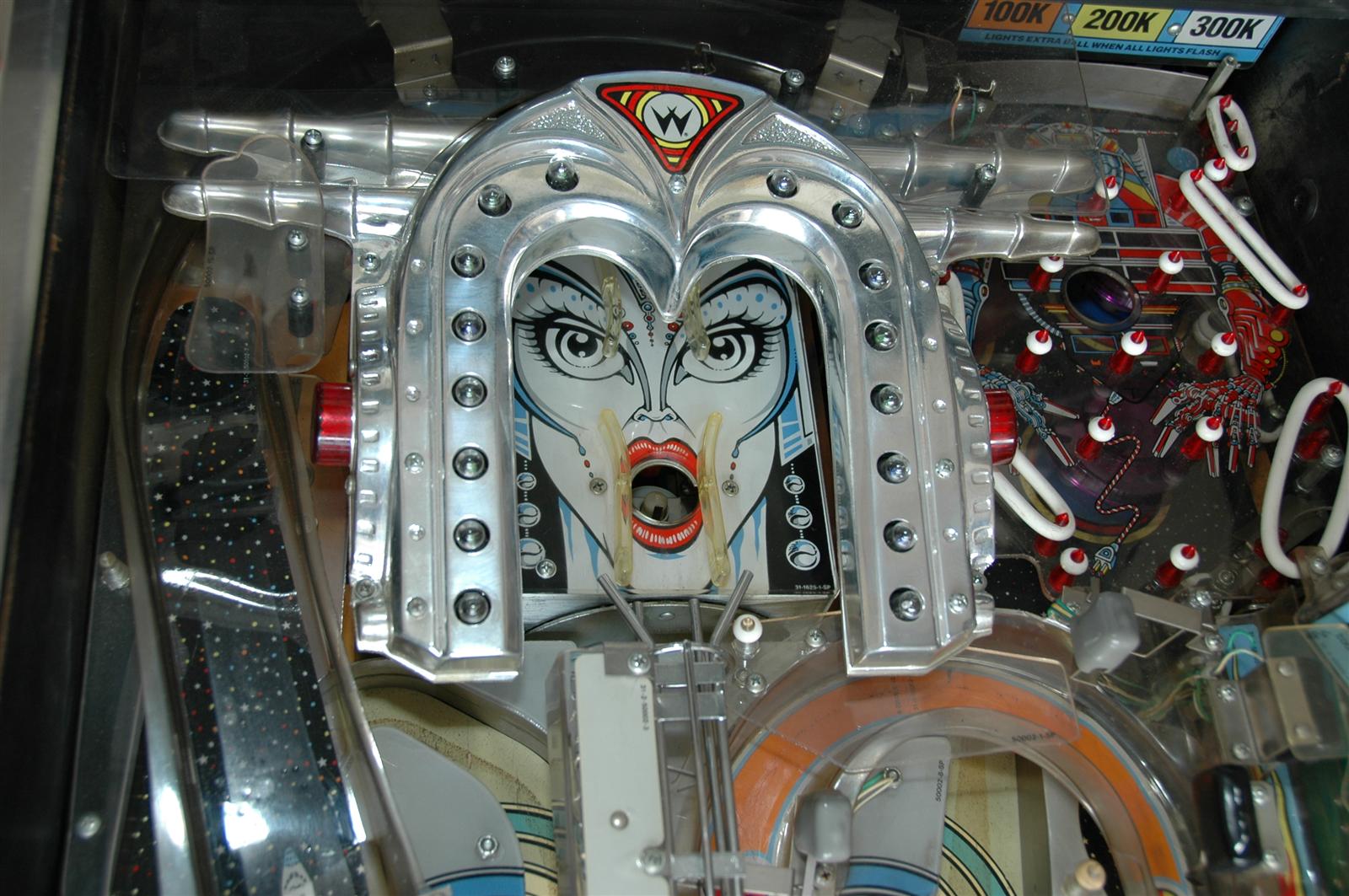 For the most part, everything was working, the display was nice and bright, and nothing seemed to be missing.  Although dirty and splattered with paint, the cabinet was in very good condition.  The back suffered the most splatter, but it was also on the left sides of the backbox and the cabinet. 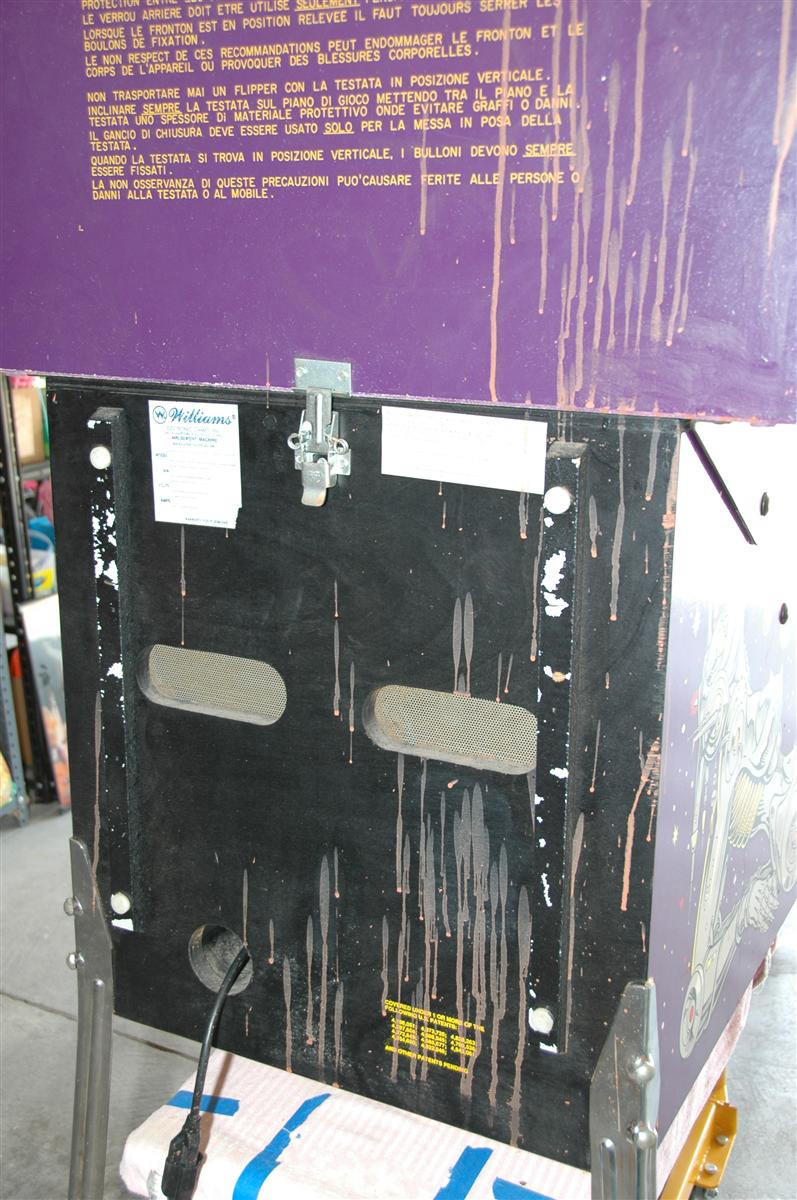 I did some searching and this Bride of Pinbot (BOP) has less fading to the cabinet than almost any that I found.  More on that later.

The playfield had Mylar, so wear was minimal.  There was bubbling of the Mylar at some of the inserts, but the artwork on the inserts had not lifted.

As typical with a “shop job” or tune up, I disassembled the upper playfield and started cleaning.  The ramps were caked with dirt and smoke/nicotine.  They were cleaned, flame polished, and the wrinkled decals were replaced. 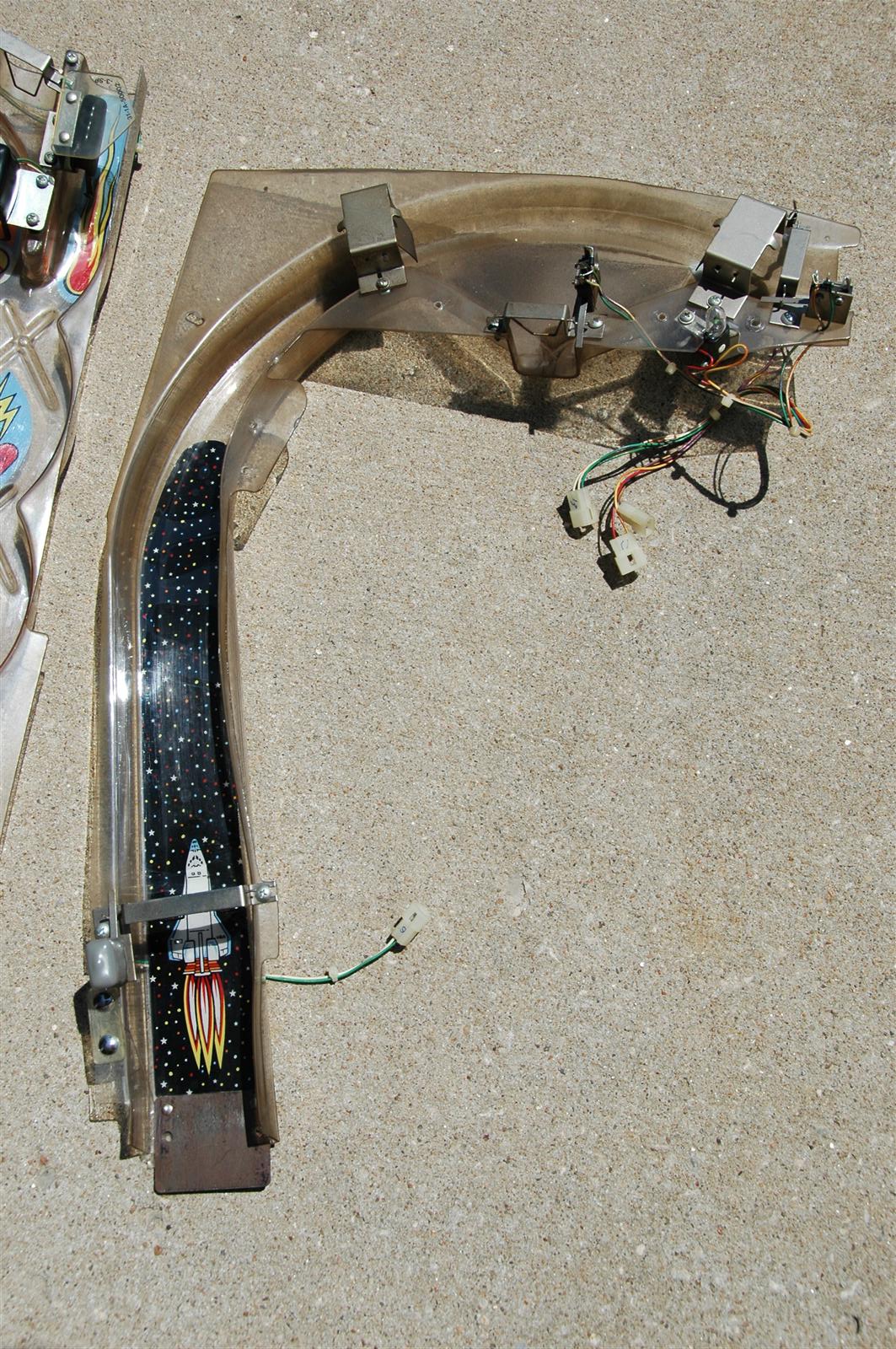 After cleaning and flame polishing.  Note:  The wrinkled sticker has not been replaced in the photo below. 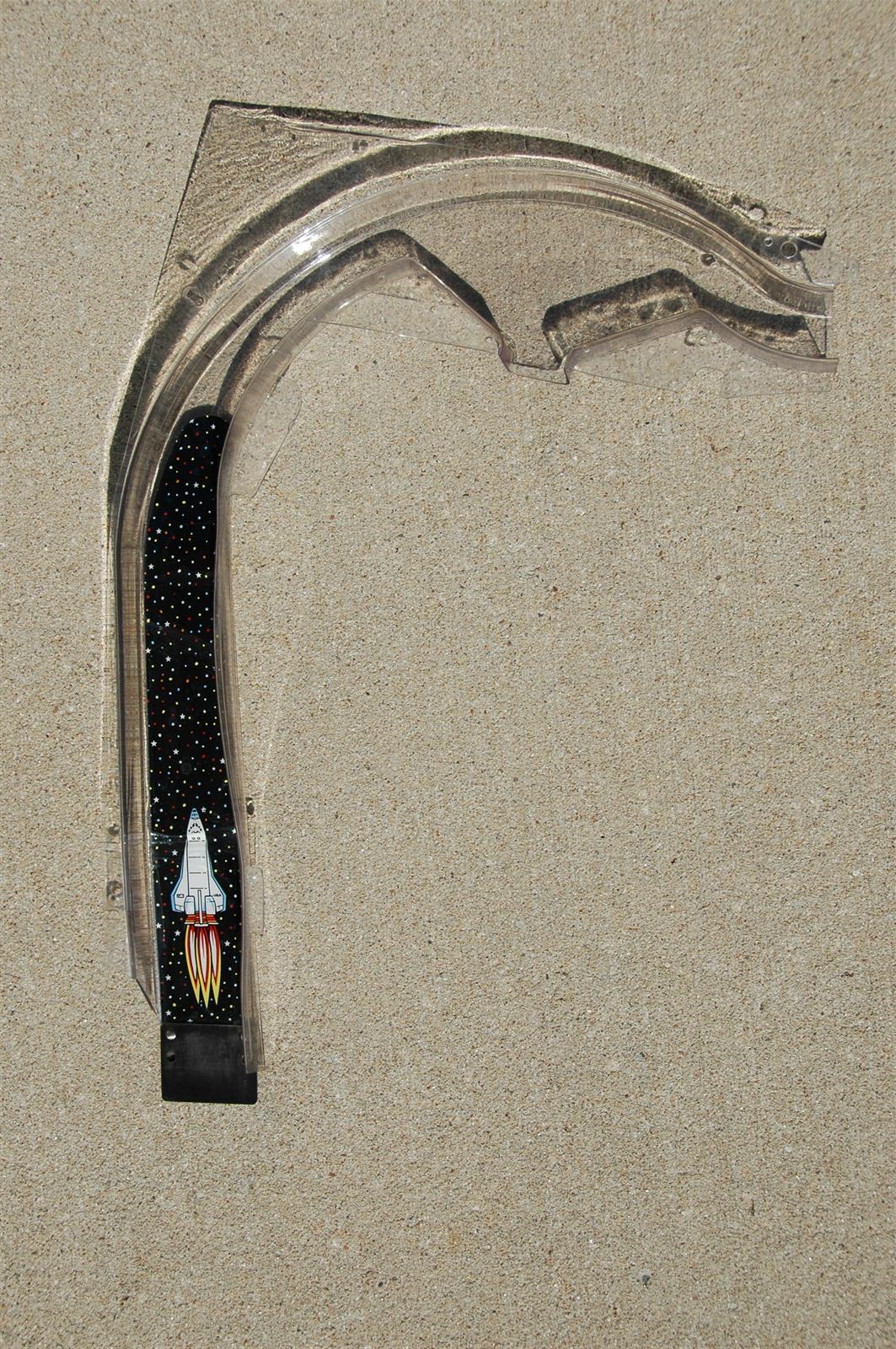 The plastics were in good shape, but many were warped by heat from the bulbs.  I flattened them by heating them with a hairdryer and pressing them between blocks of MDF.  I prefer to use a hairdryer rather than a heat gun or oven because I feel the lower heat gives me more control and less chance of damaging the plastics.  It takes longer, but I’d rather take a little more time than damage the plastics.

I cleaned and sanded the shooter lane.  It was then clear coated to protect the wood and keep out dirt 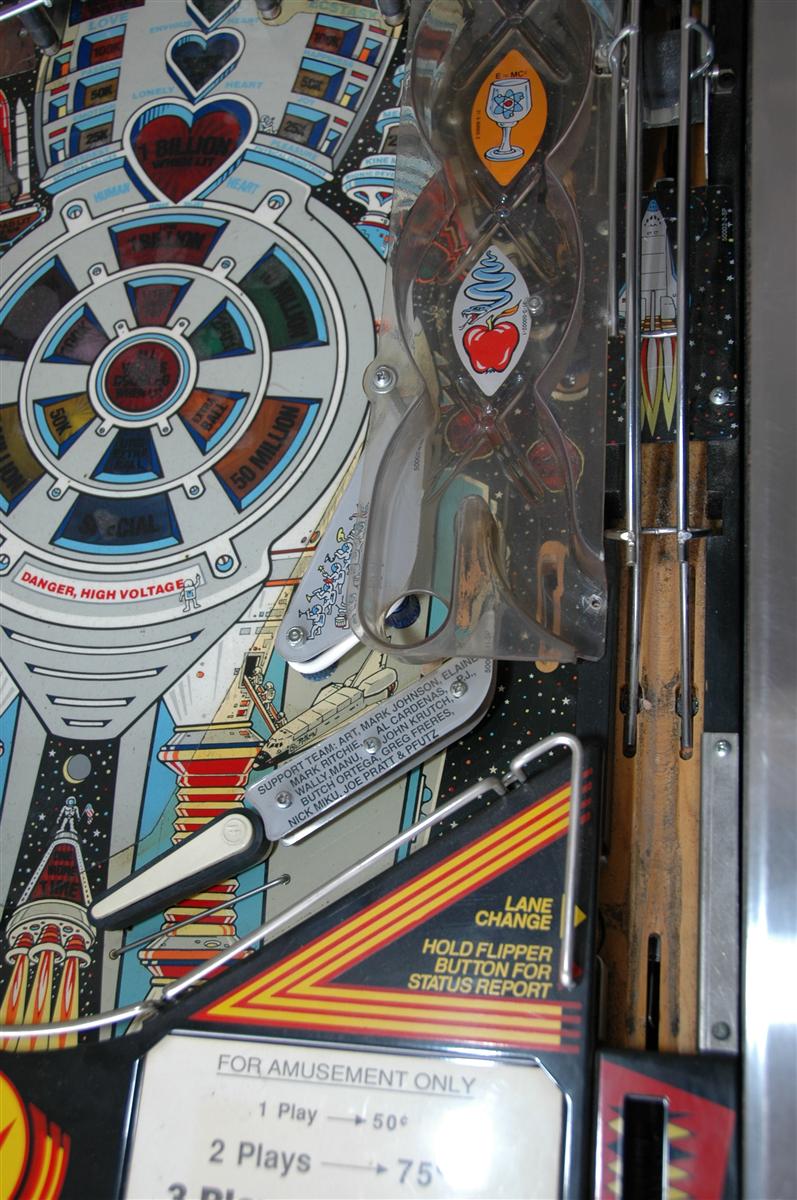 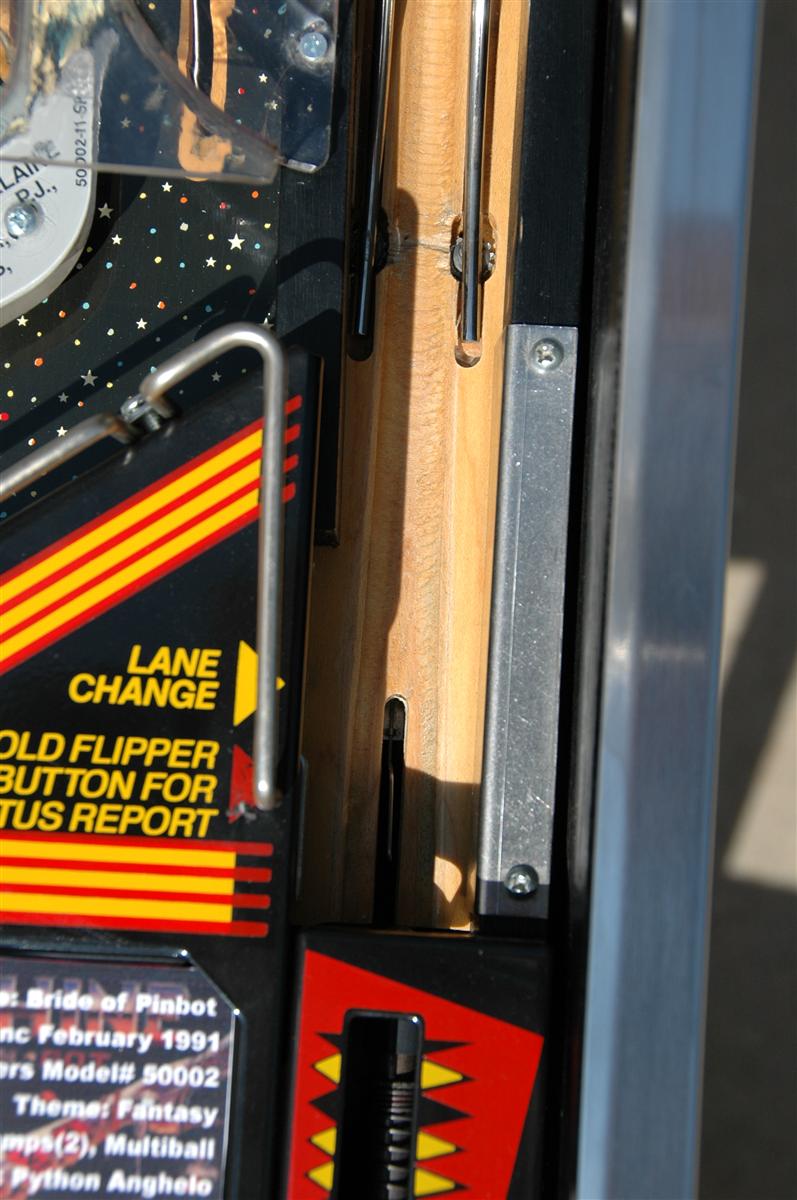 All the upper playfield items were cleaned.  Metal parts were tumbled to polish them.  Various parts were replaced such as plastic posts, pop bumper caps, flipper bats, some metal parts, and of course all the rubber.  Some touch up work was done to the ball drop areas at the inlanes.  The inside black portion of the cabinet was repainted to get rid of scuffs and scratches from raising the playfield.

All bulbs were replaced and LEDs were installed in hard to replace areas such as the pop bumpers, Pinbot value lamps, the head’s eyes and mouth, flashers, and lamps under plastics that can’t be easily reached.

Under the playfield, all mechanical parts were cleaned and rebuilt.  This included the flippers, pop bumpers, slingshots, and the jackpot trough.

In the backbox, the battery holder was replaced due to corrosion from leaky batteries.  Fortunately none of the electrolyte got on the board and there was no damage.

For some reason, Williams installed absolutely no protection for the ramps on this game.  As a result, they are always cracked and broken.  Luckily the broken pieces were in the bottom of the cabinet.  I repaired the broken parts and Cliffy Protectors were installed to keep the ramps from getting further cracked and broken.  The protectors cover the existing damage and the ramps look great.

I repainted the raised door frame edges on the coin door as well as the raised coin deposit and coin return areas. 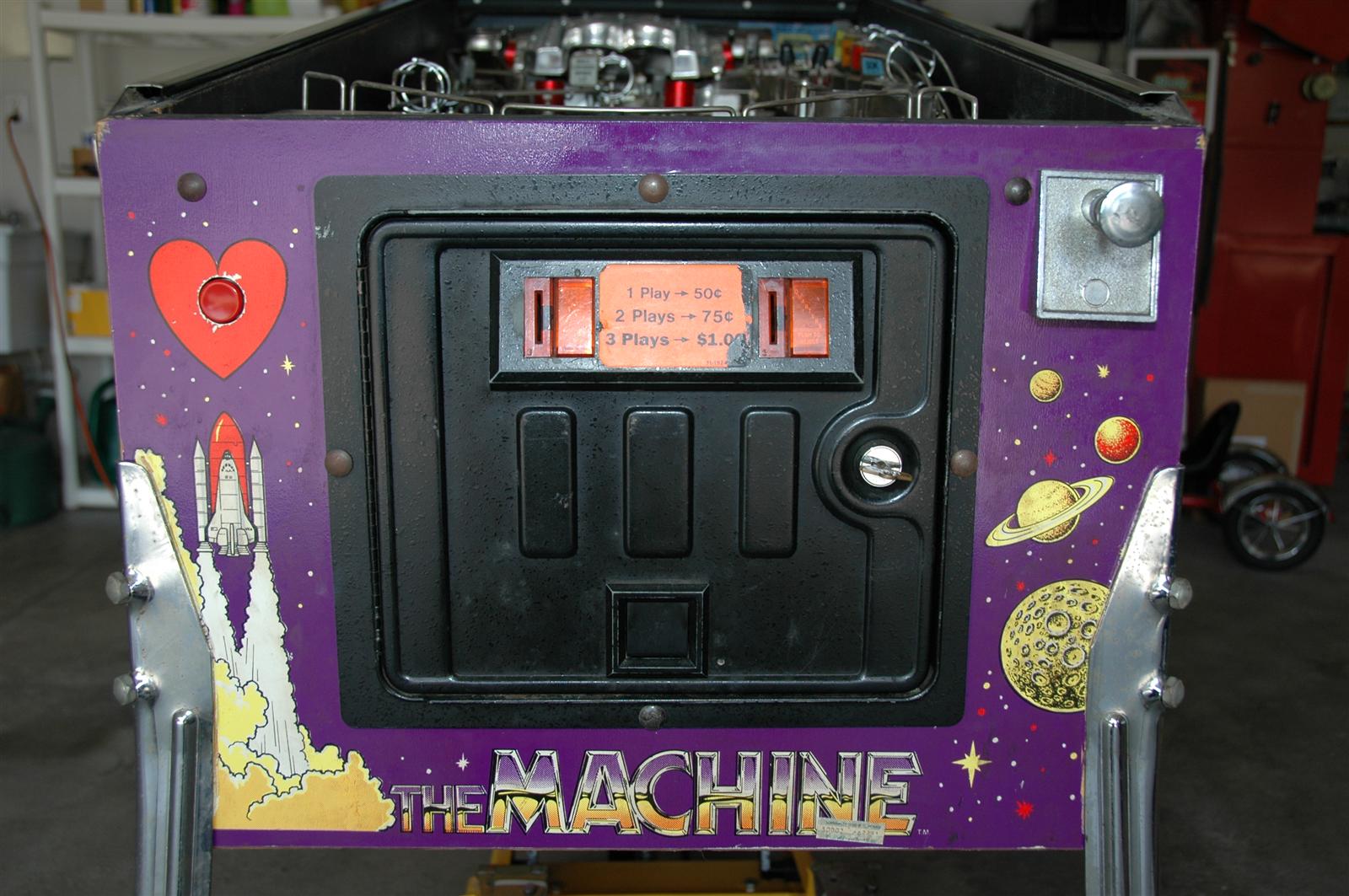 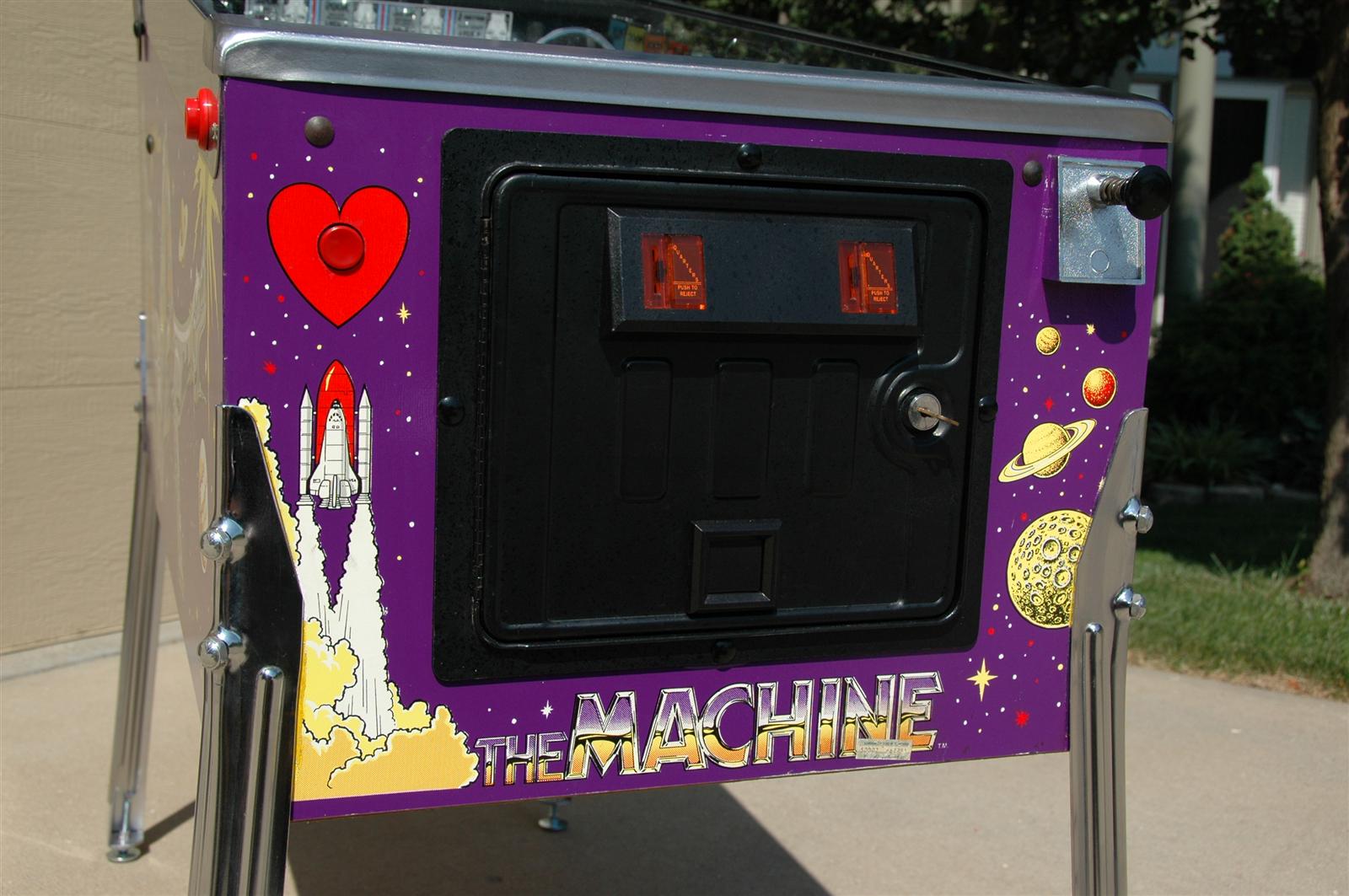 Finally, I updated the game EPROM to the latest L-7 revision.  This revision requires a larger EPROM than what was in the game.

Time for some before and after photos: 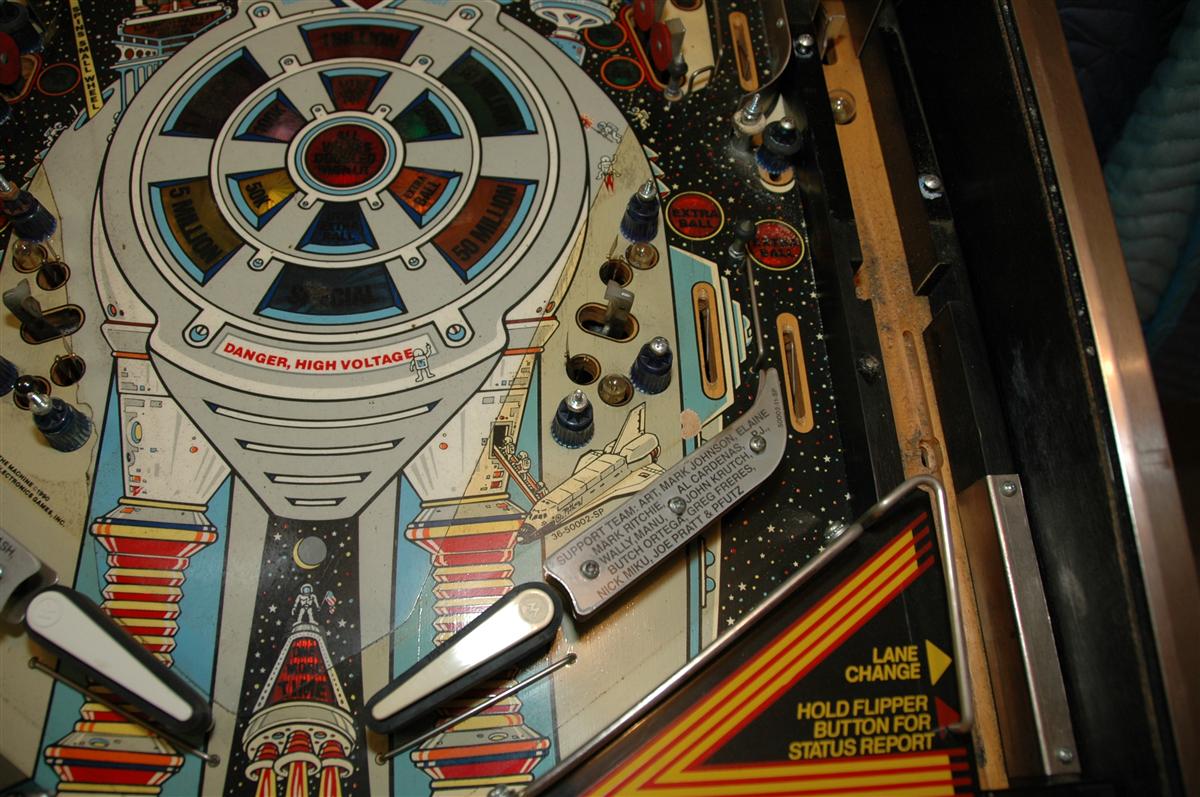 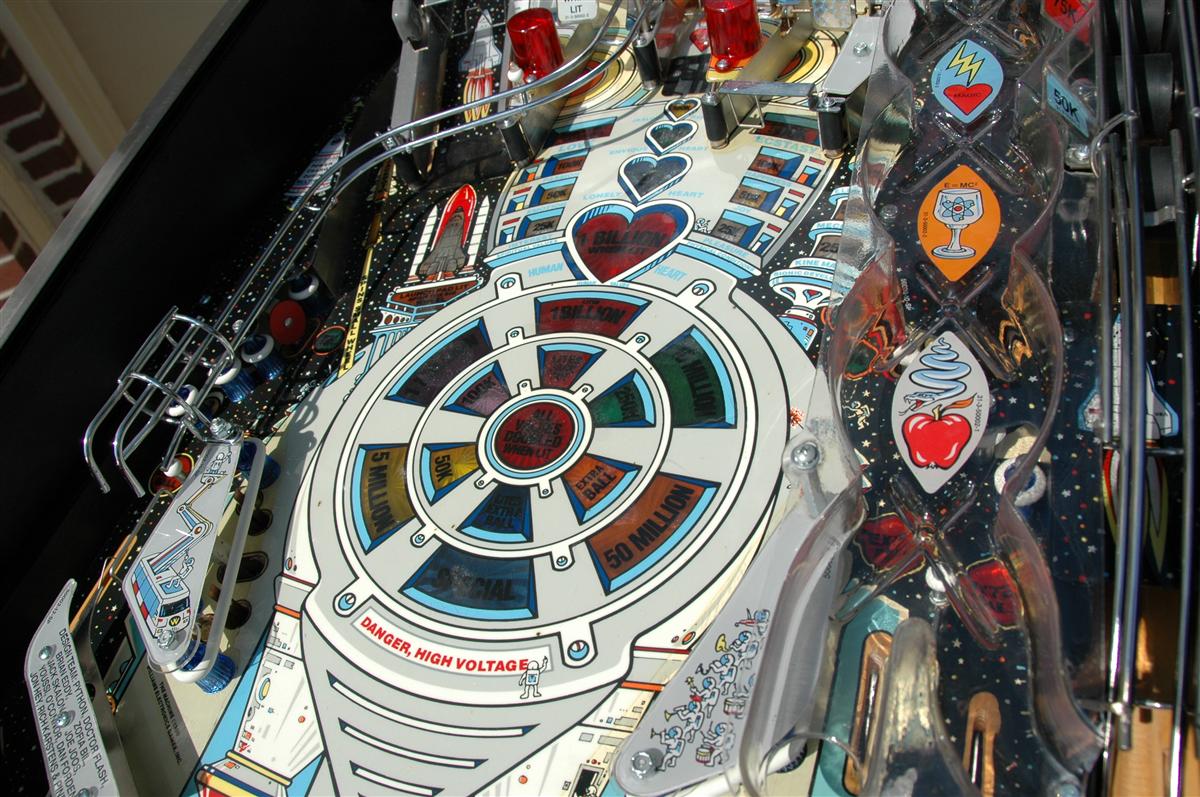 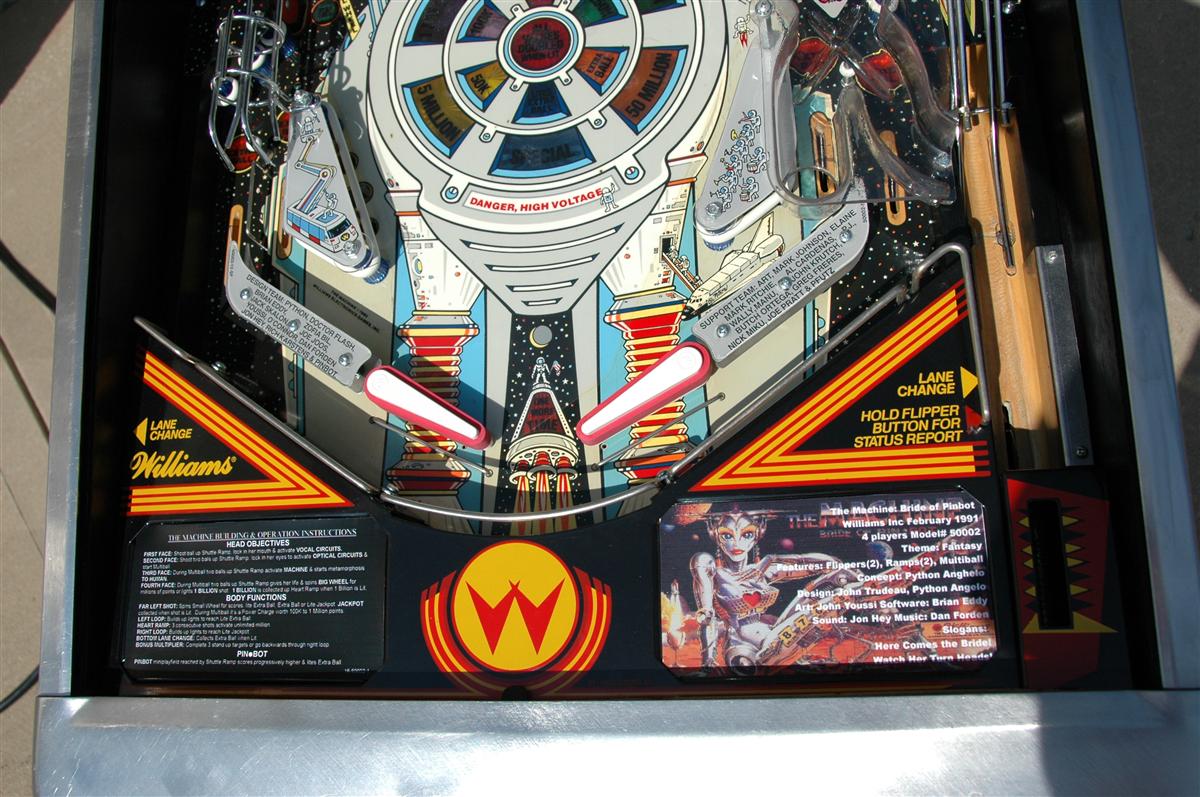 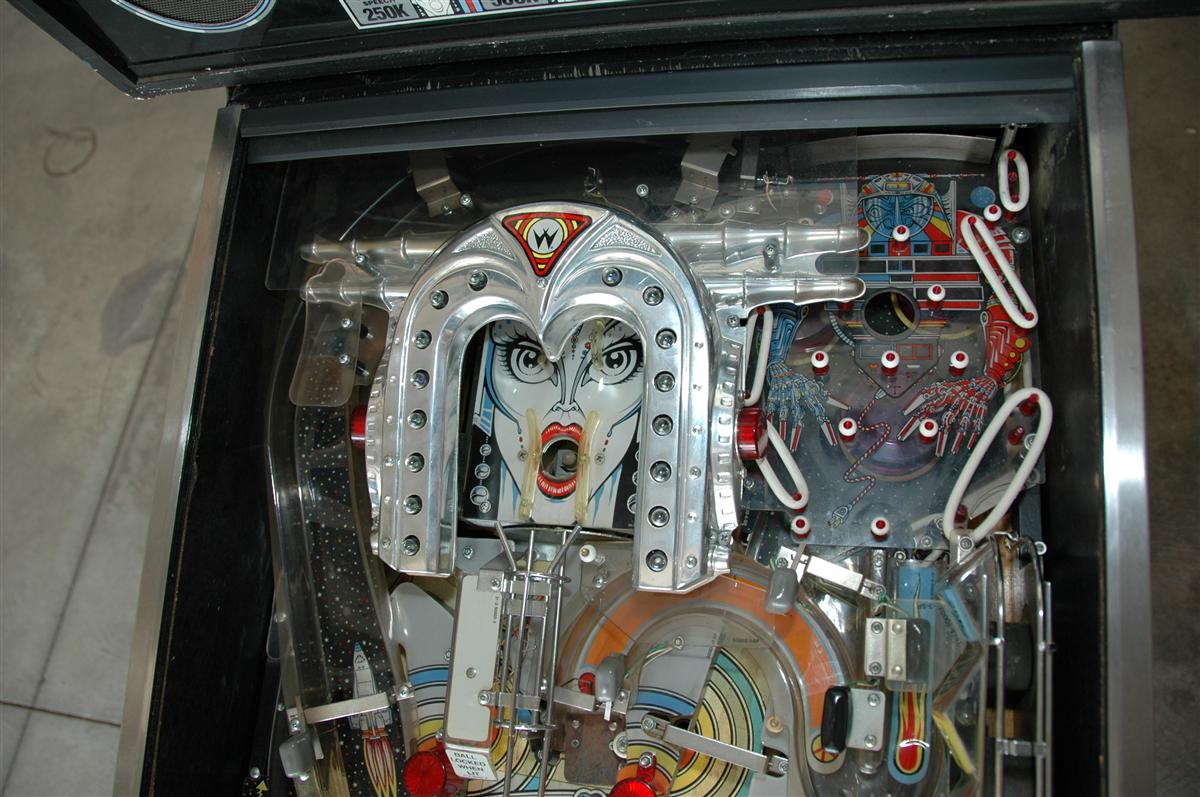 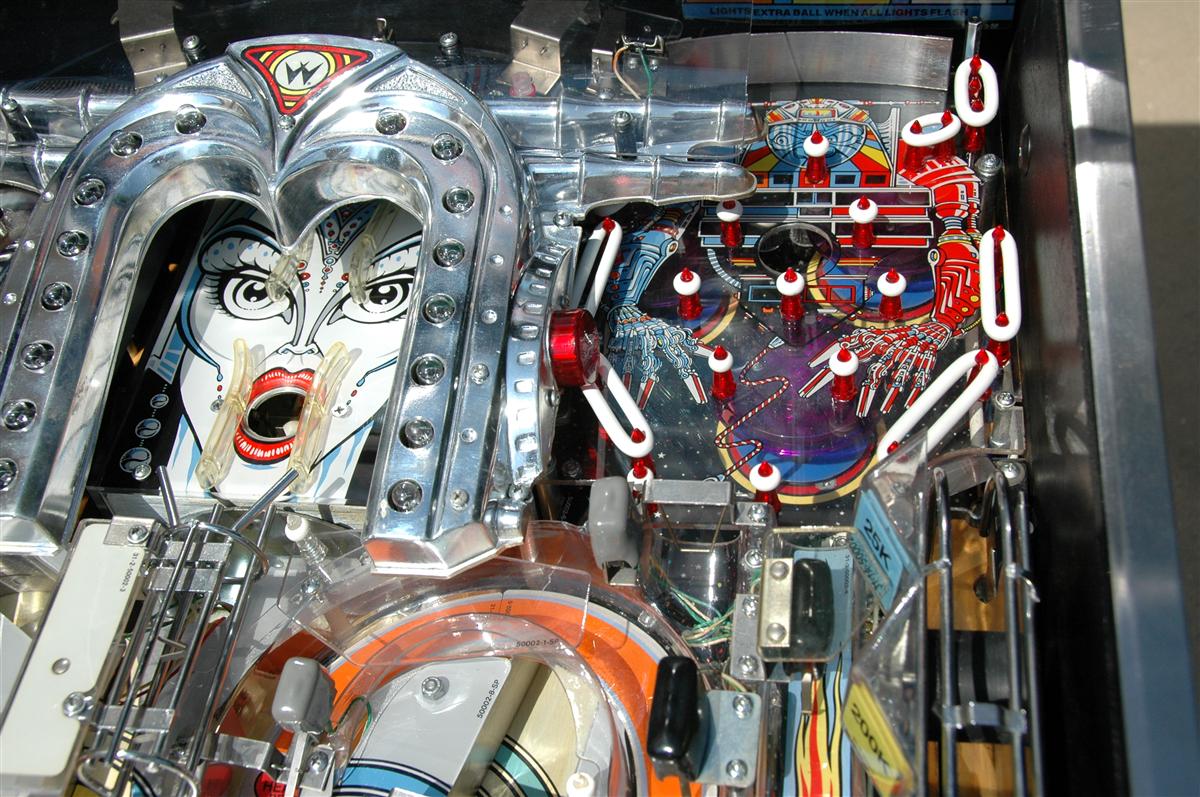 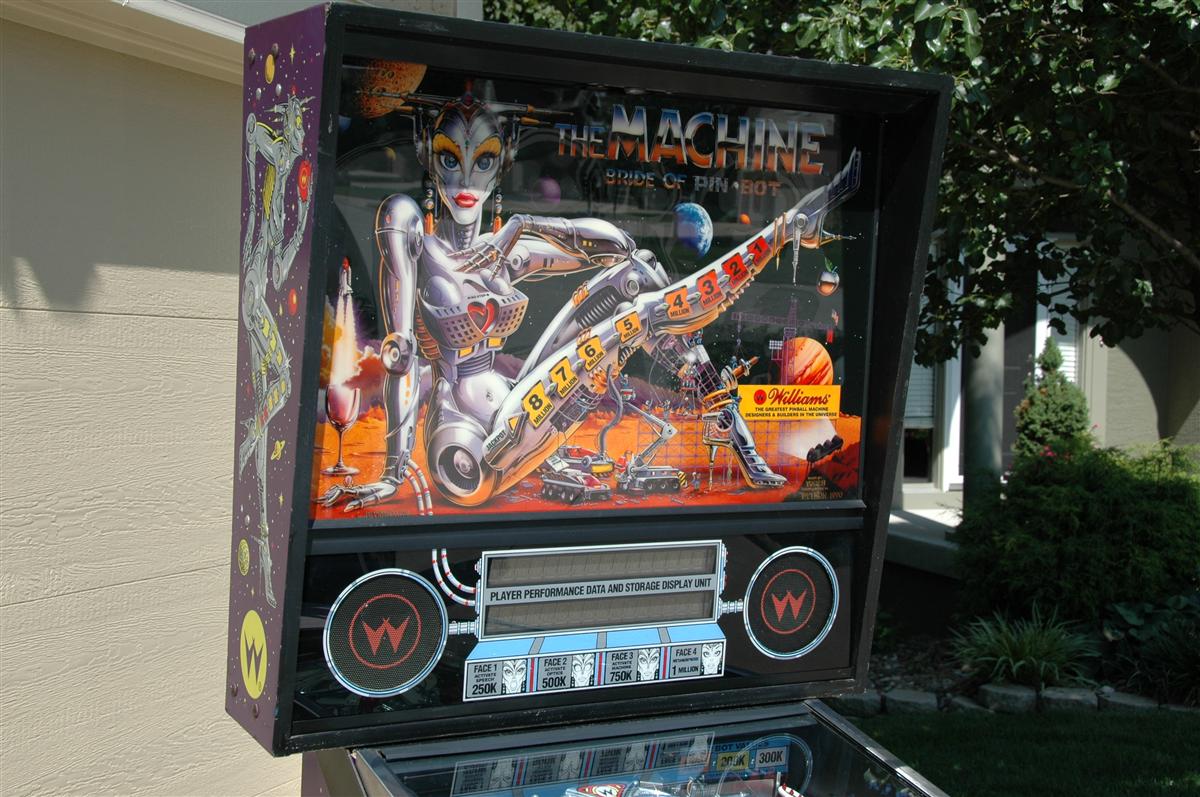 There are a few scuffs and scratches to the backbox sides, but overall the backbox is in very nice condition. 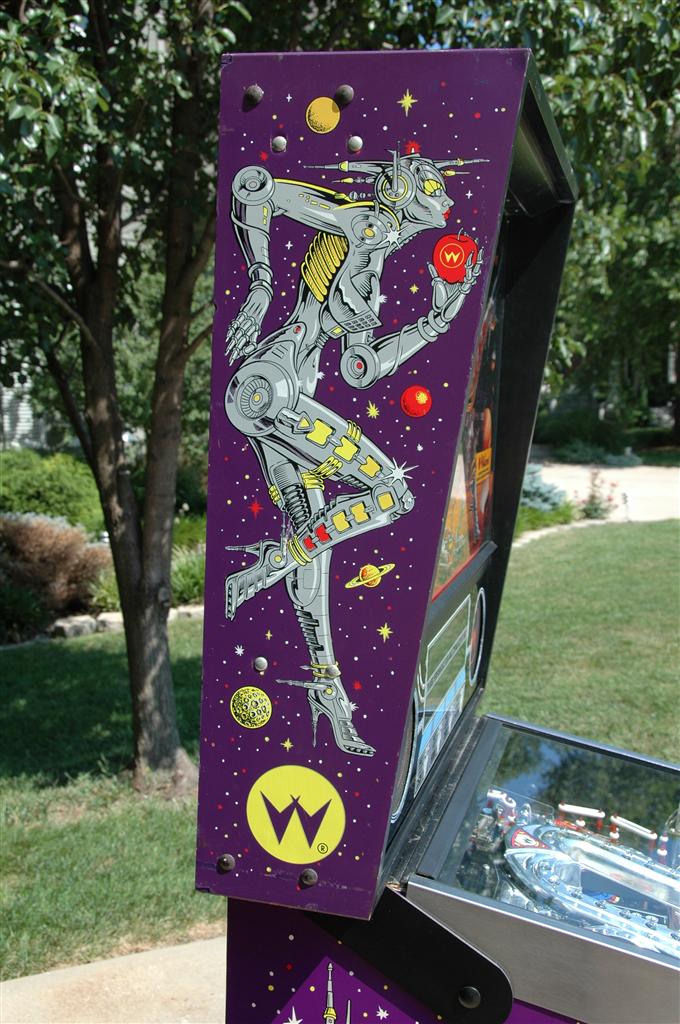 The red is often completely faded on Bride of Pinbot cabinets.  It often looks the same as the yellow that is present on the cabinet.  None of the red in these photos has been repainted.  The only touch up I did to any red was some minimal work around the start button.  This can be seen in the above photos of the coin door. 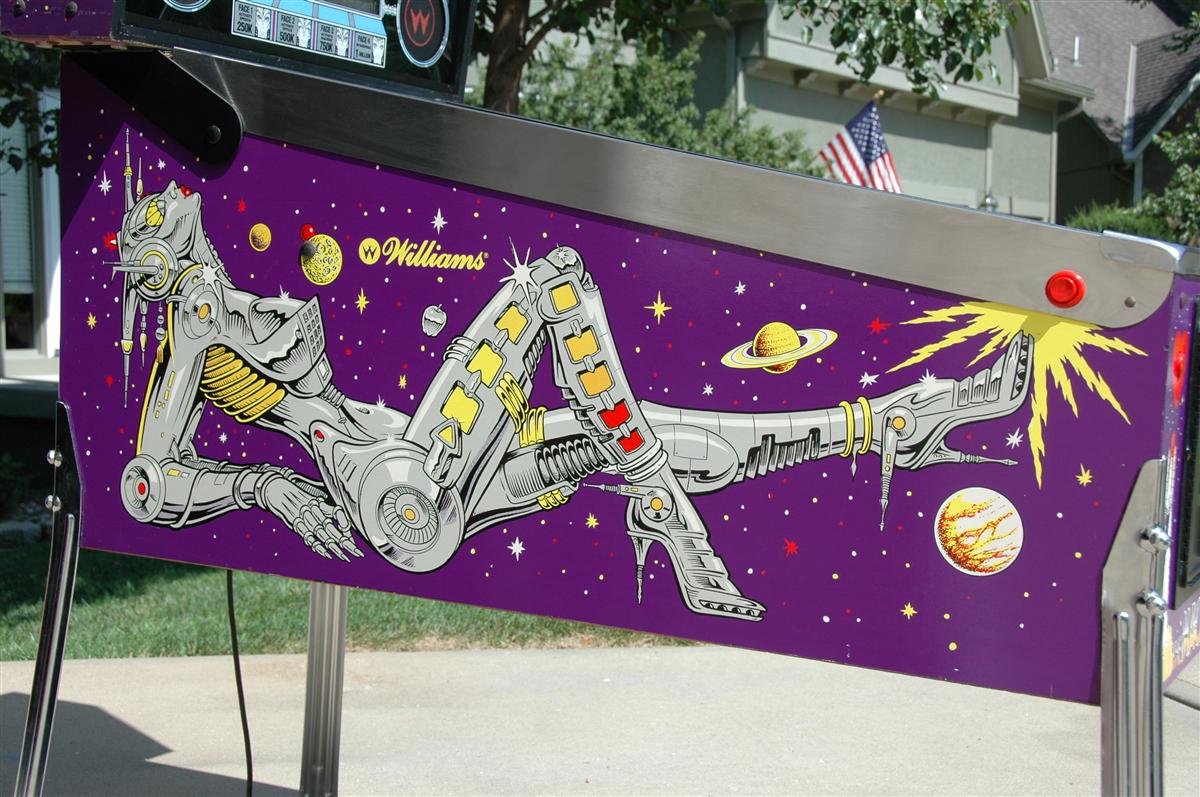 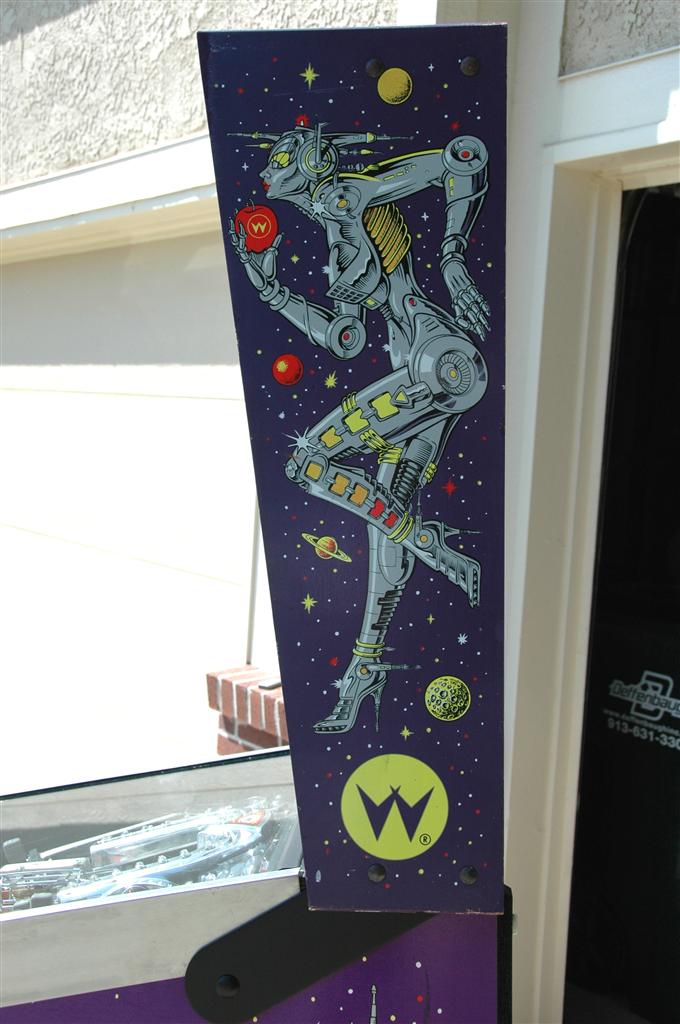 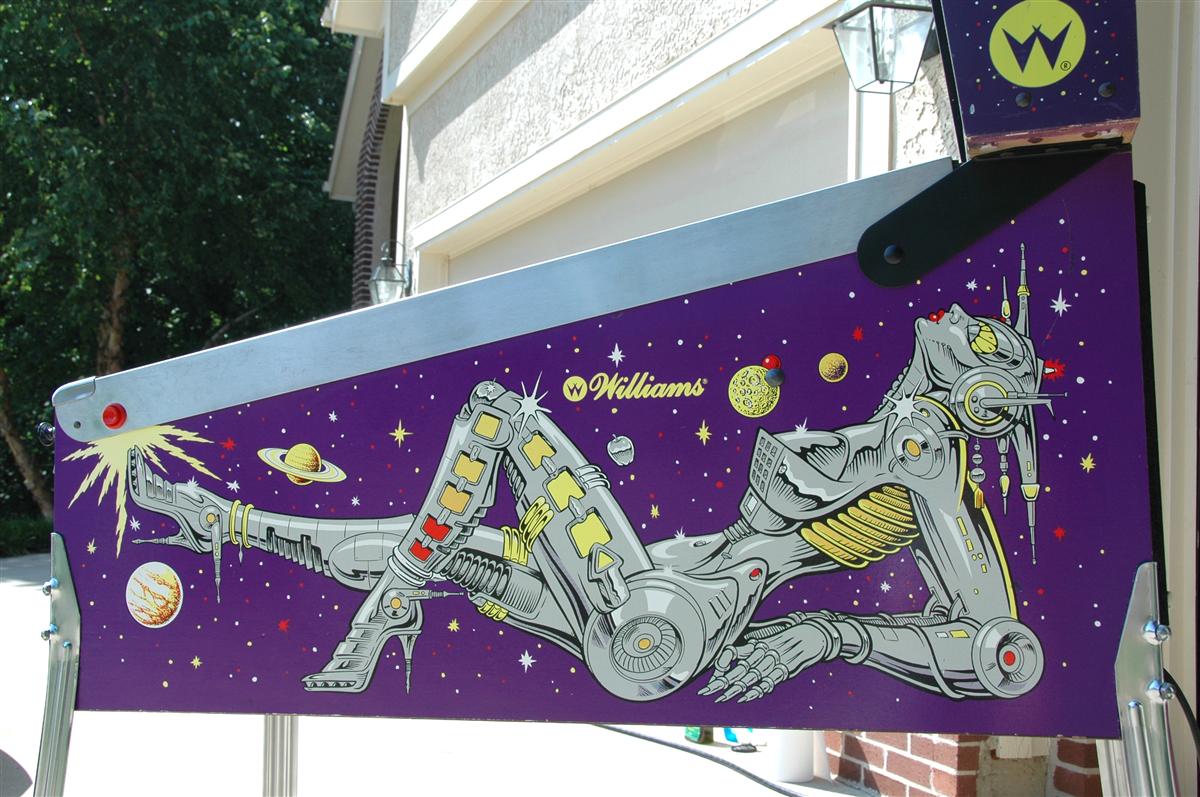 As a side note, the new owner of this game reported problems with the head not rotating to the left, therefore it would not reset when a game was over.  This caused the game to be reporting shots to the eyes when it was actually to the mouth, etc.  The problem was cold solder joints on the motor regulator board.  Evidently during transport these pins cracked enough to start causing problems.  He was able to repair the problem and the game is fine.