Terminator 2 is a rather simple but fun game. This one was in pretty good condition but had a few issues that needed to be addressed. 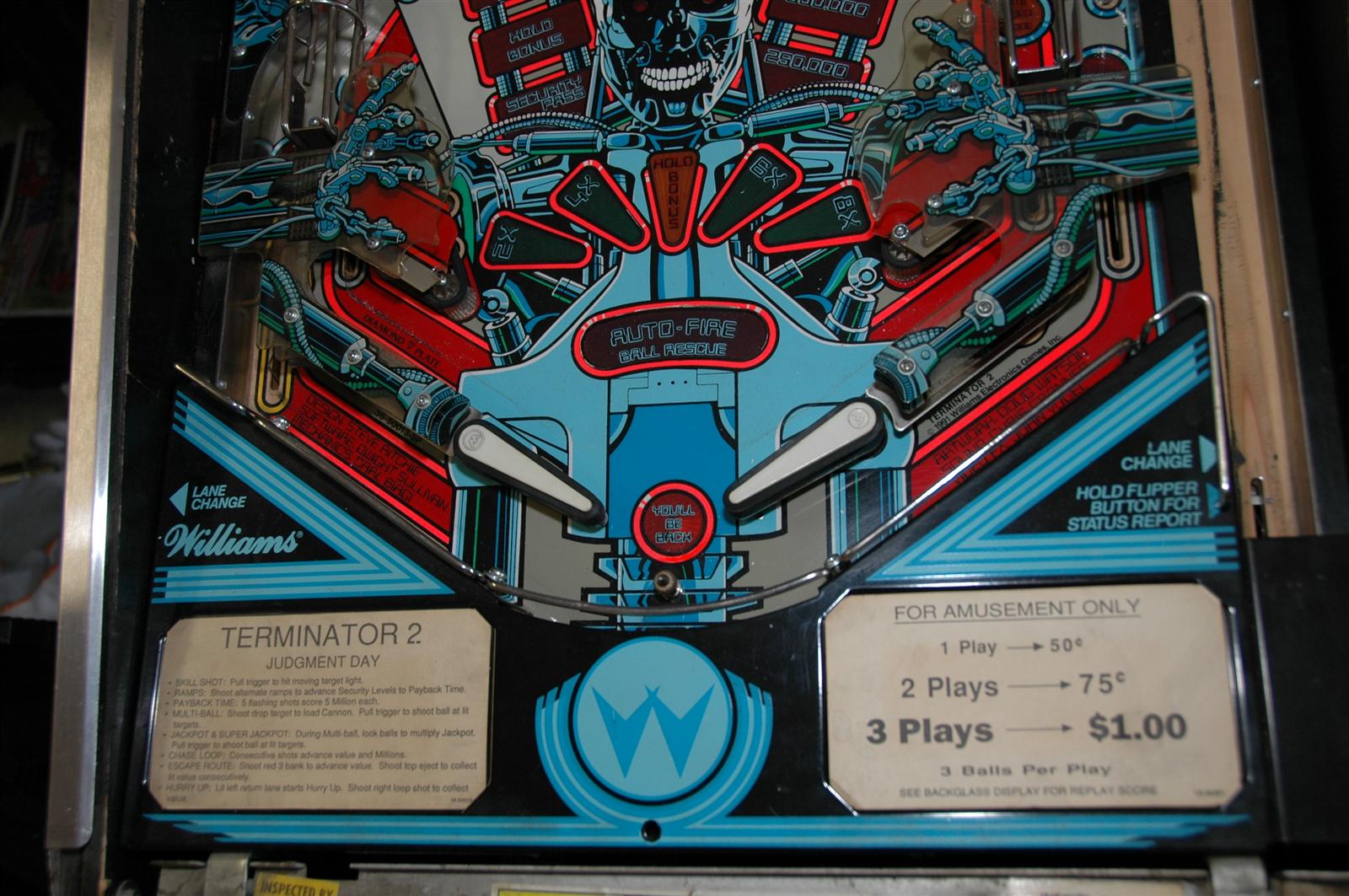 I like to try and diagnose and fix all problems and issues (within reason) before tearing a game apart. I can get a better idea of costs and parts that will be needed, and it makes the whole process smoother, from ordering parts to reassembly. This game had no CPU controlled lights. In other words, none of the playfield insert lights worked. So you couldn’t tell what shots to hit or see your progress. That repair is detailed here.  Also, the canon would not rotate, so the entrance to the vertical up-kicker (VUK) under the skull was blocked off with a rubber ring.

All fuses were checked and they were good. However, many of them were the wrong value. Someone always seems to replace fuses with the wrong value, always larger of course. Don’t do this, it is asking for trouble. If you don’t have the right sized fuse, don’t play the game and go get it. If it keeps blowing, fix the problem.

Now for some before pictures: 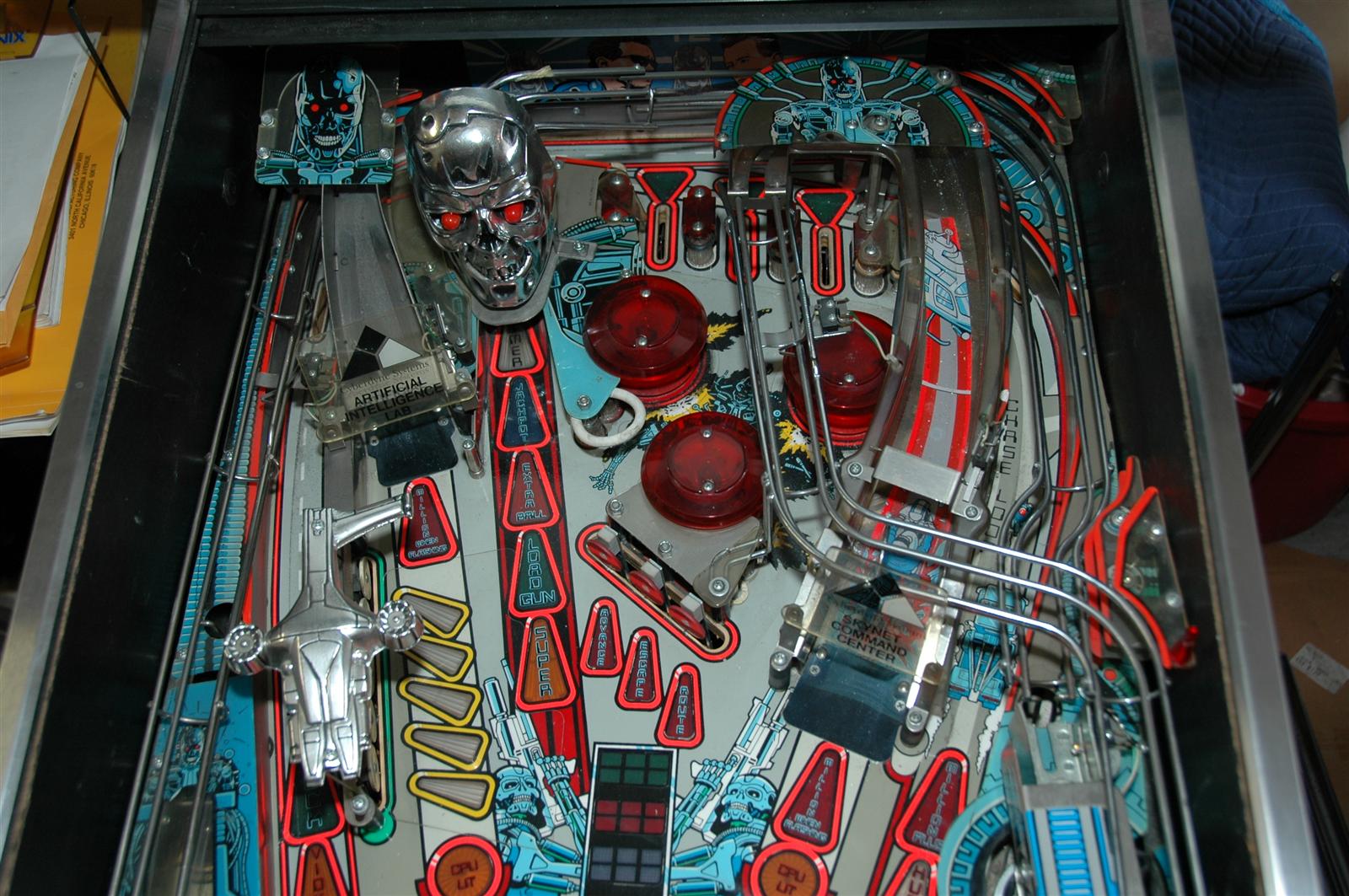 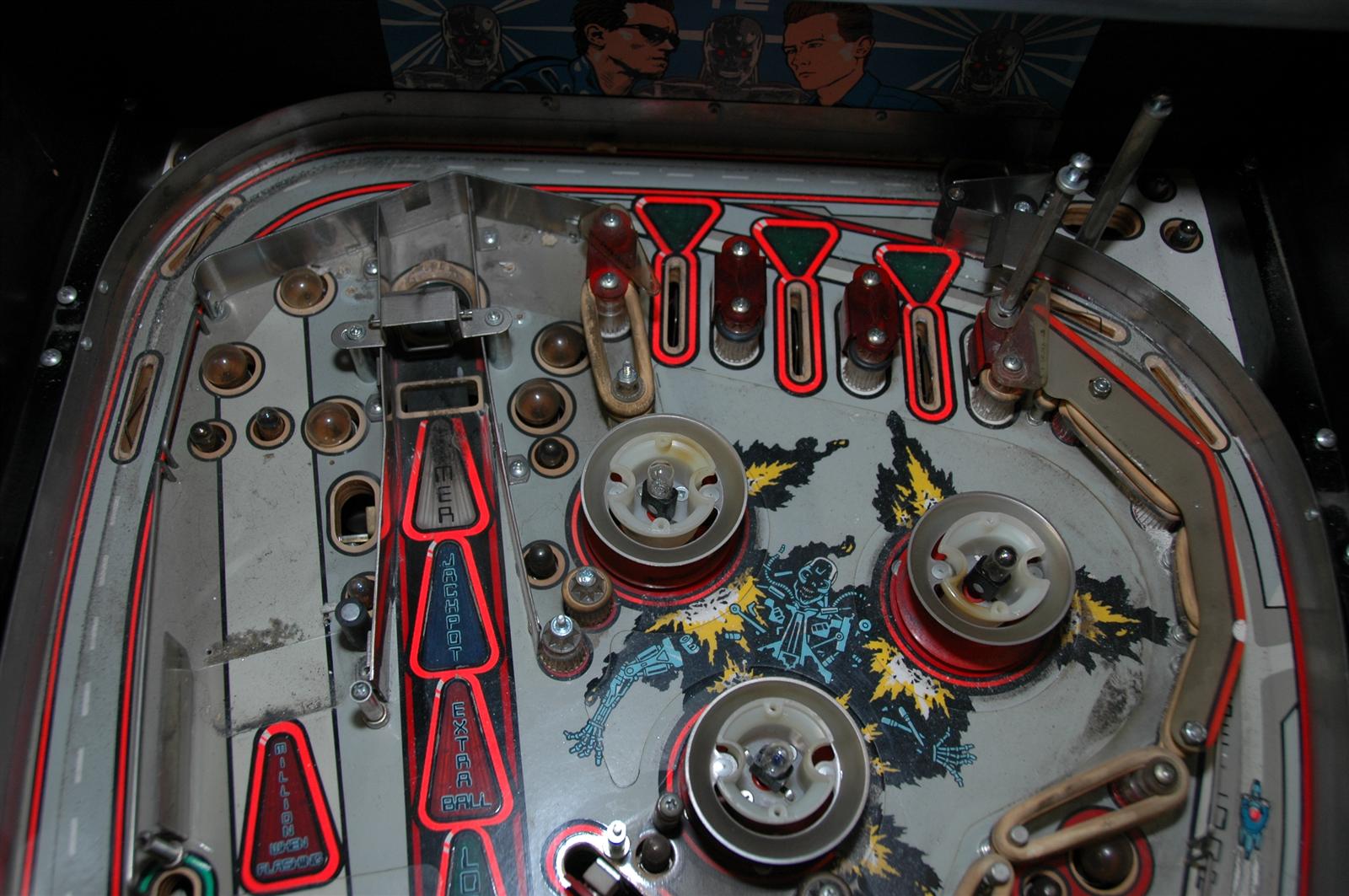 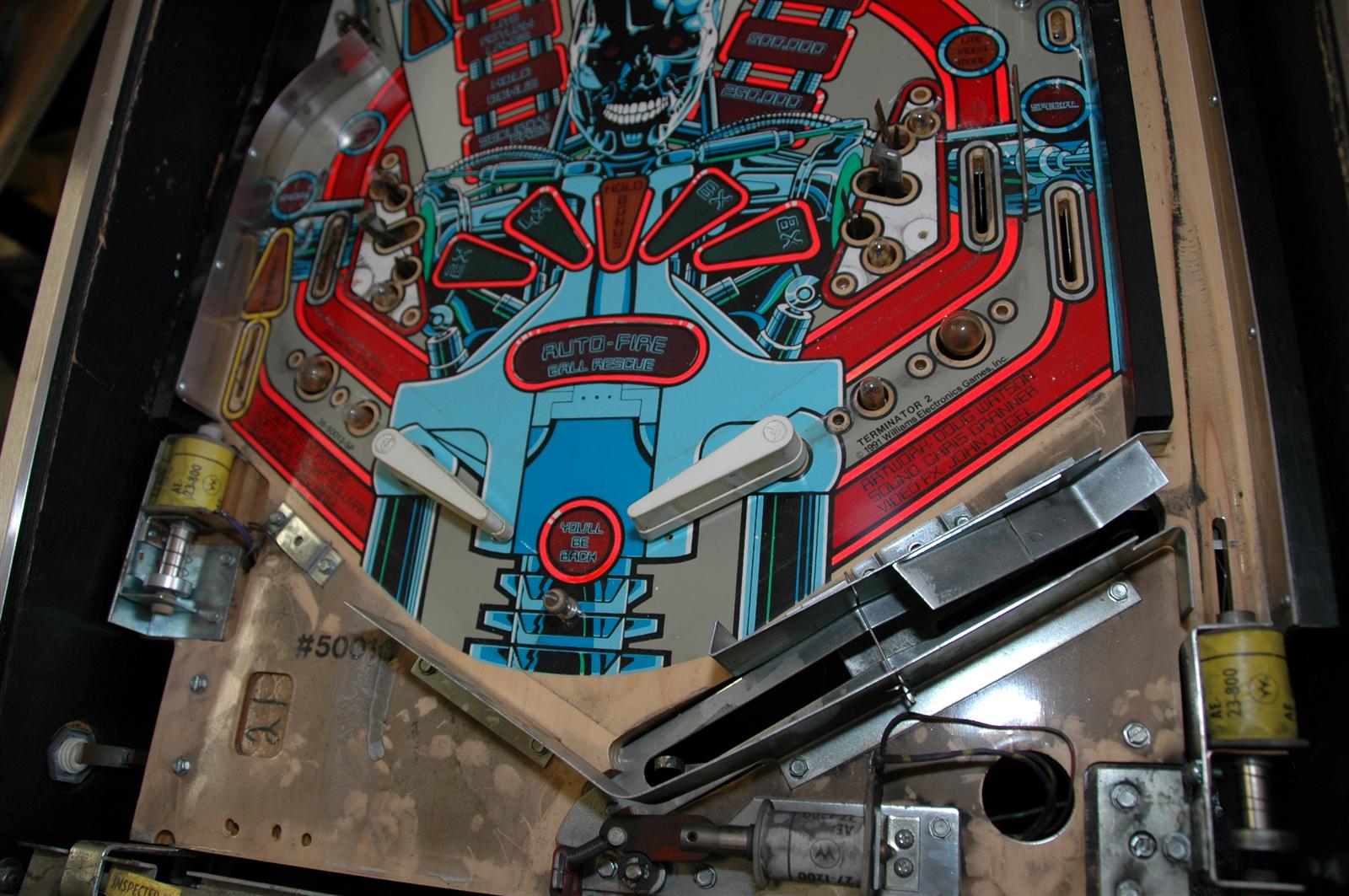 Playfield parts were removed, cleaned, polished, and metal parts were tumbled in a vibratory polisher where applicable.  Anything that comes in contact with a pinball is cleaned so that dirt does not get spread around after reassembly.  The clear ramp was cleaned and flame polished.  The metal ramp was cleaned and re-grained to remove ball wear.  New slingshot plastics were installed and a new Hunter ship was installed.

The problem with the cannon was due to it being greased and lubricated with some kind of spray lubricant.  It was simply bound up and could not rotate.  The canon assembly was removed, cleaned, and the shaft was lightly lubricated with grease.  Key word is lightly.  If a part like this ever needs more maintenance, remove it, clean it, and re-lubricate it.  Don’t just spray lubricant on it and hope for the best.  The end result of spraying it is that it gums up and binds.  The cannon was re-installed, adjusted, and it worked great.  In summary, don’t lubricate anything on a pinball machine unless it is a case of metal on metal contact.  Flippers, vertical up kickers, slingshots, and drop targets do not need lubrication.

The playfield was cleaned, polished to a nice shine, and waxed several times.  The shooter lane was cleaned, sanded, and clearcoated to protect it and keep dirt out.

LEDs were installed in the playfield general illumination (GI) and the backbox GI.  T2 looks pretty nice in LEDs, they go well with the theme and the artwork.  Cointaker’s GI kits were used.  Here it is with LEDs and just a little bit of reassembly underway. 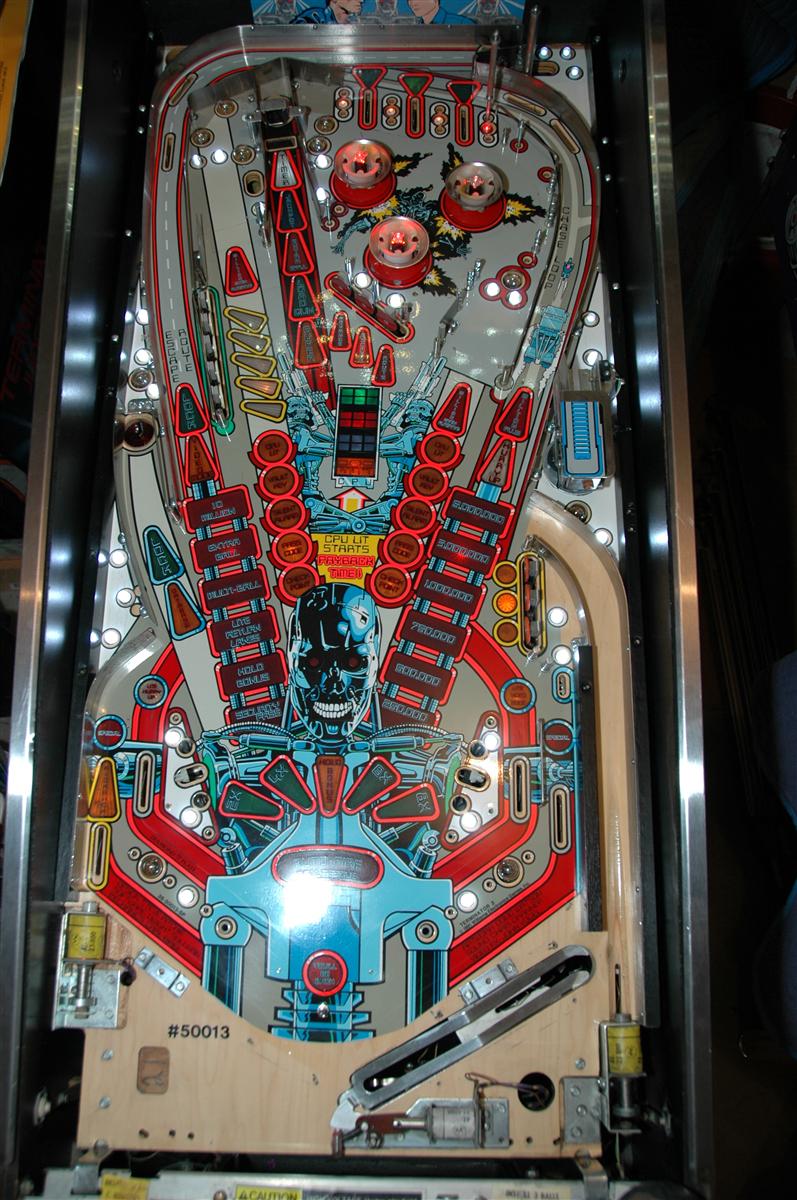 Some more after pictures: 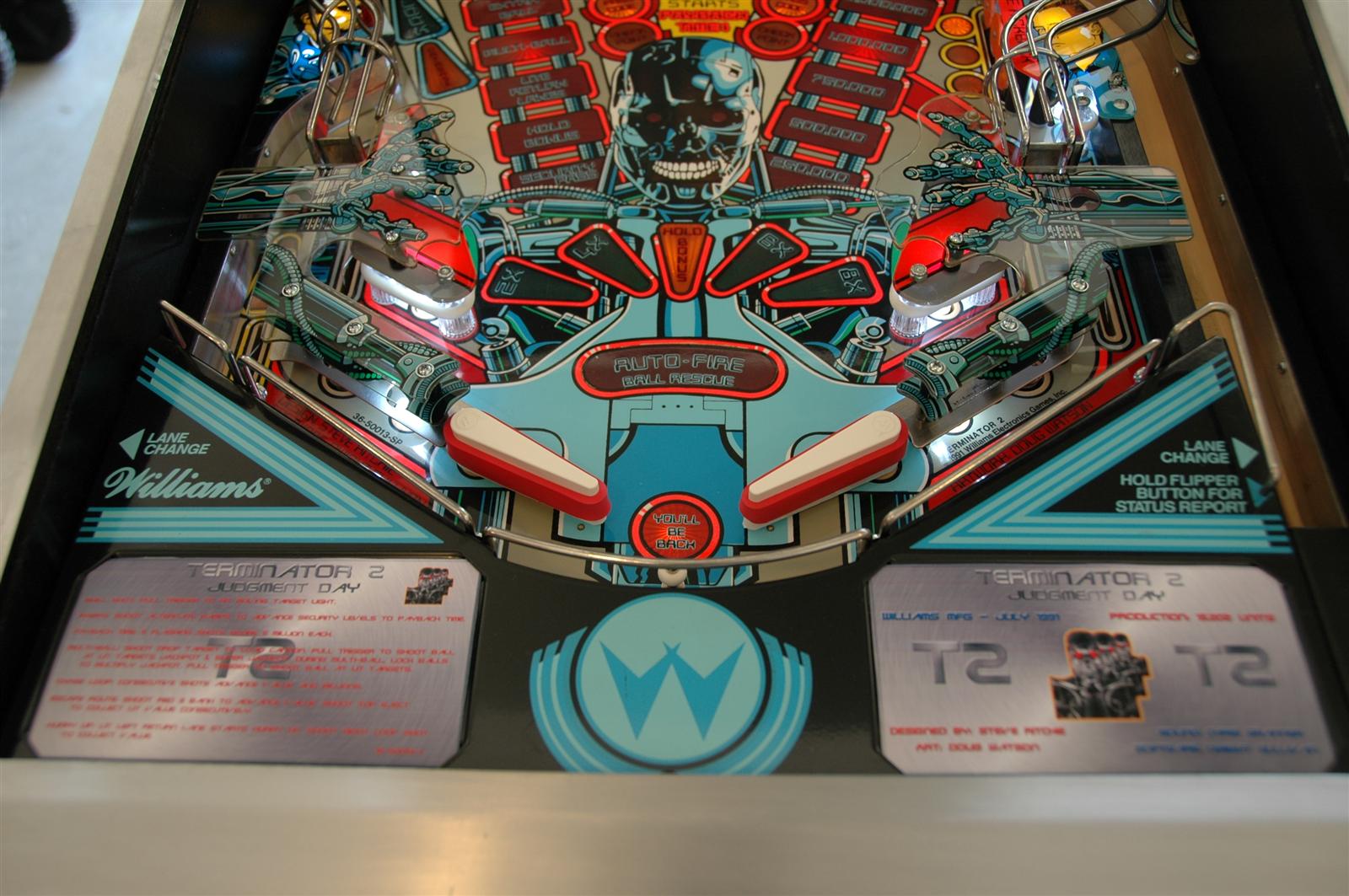 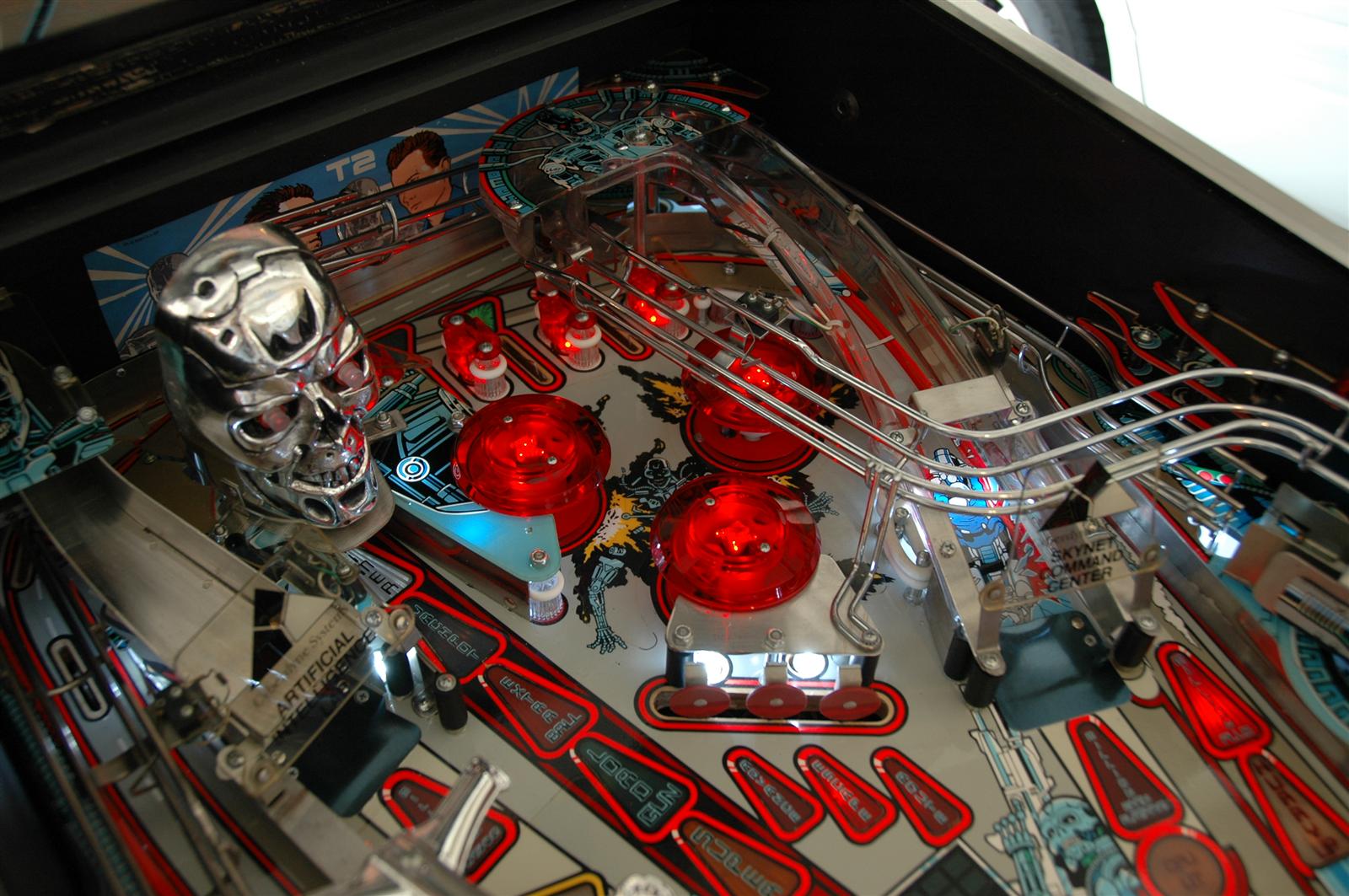 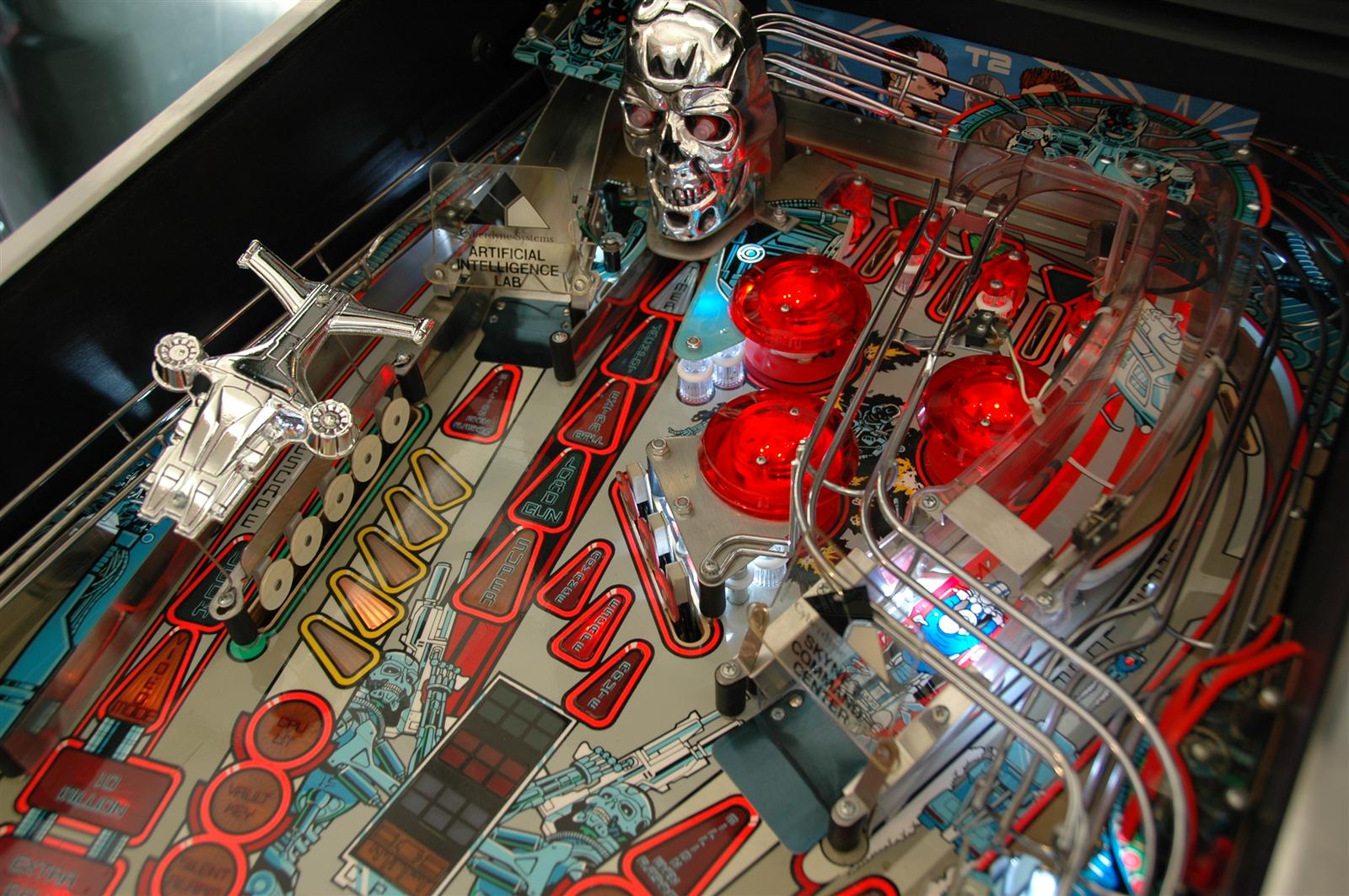 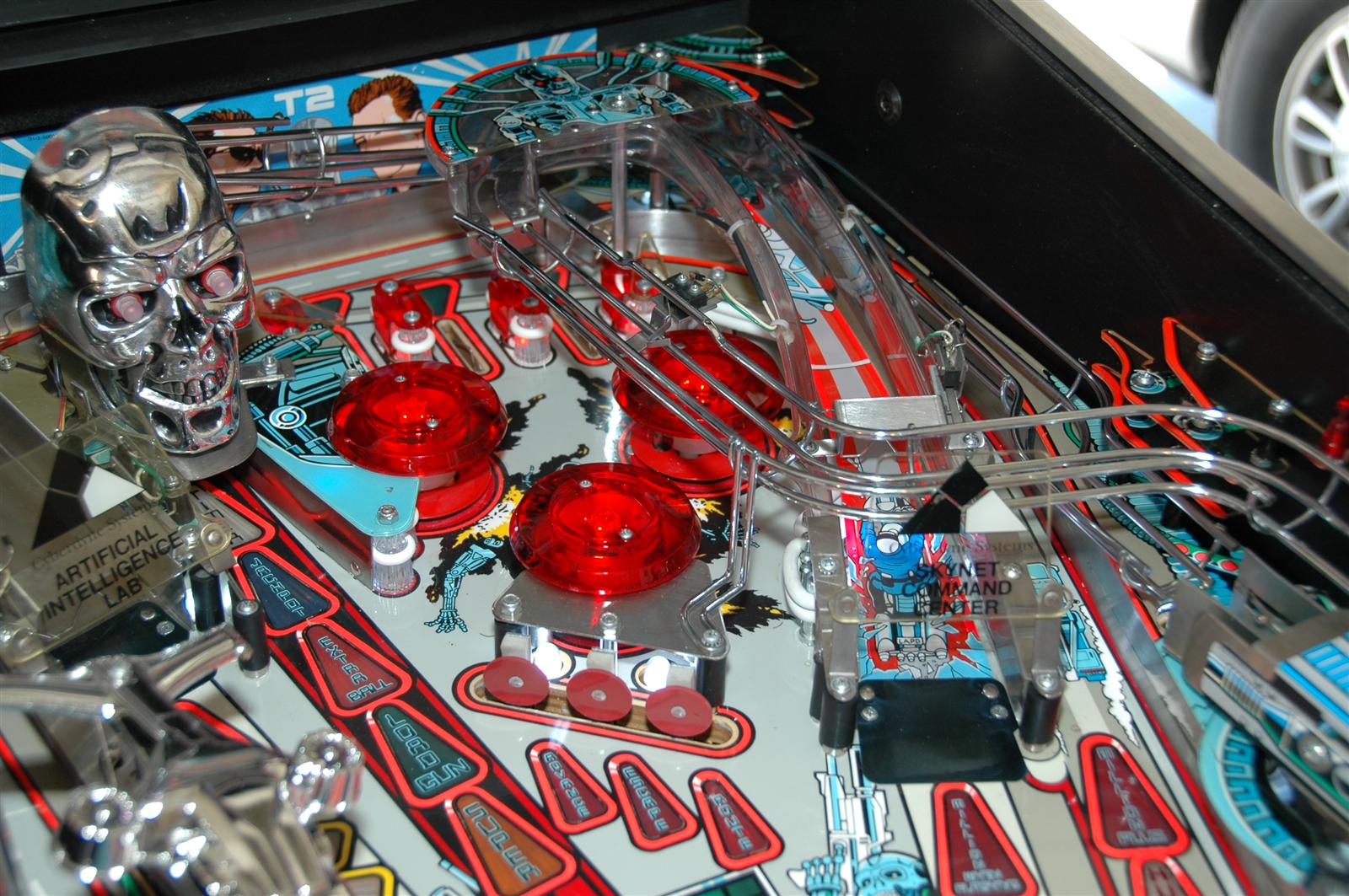 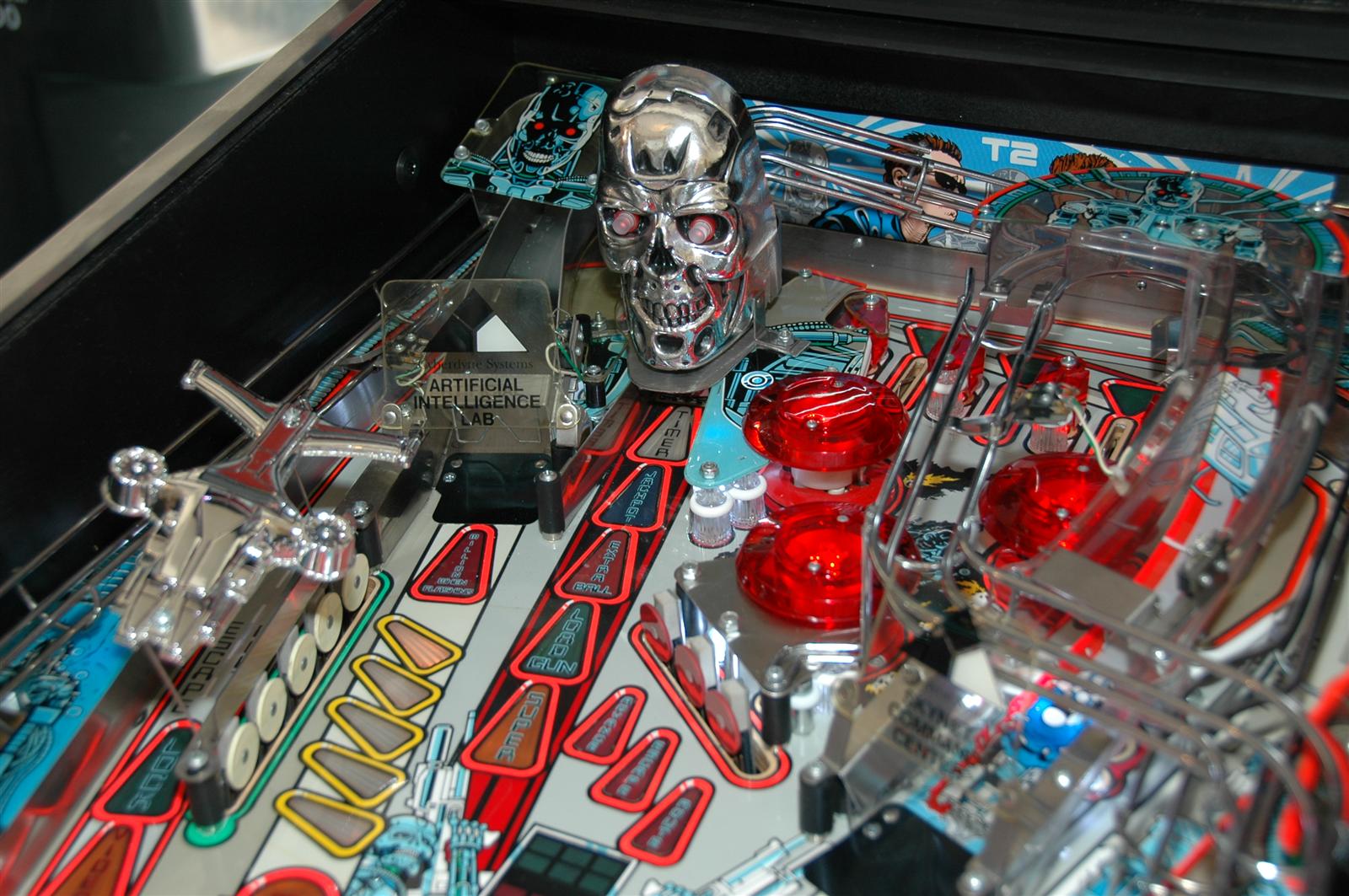 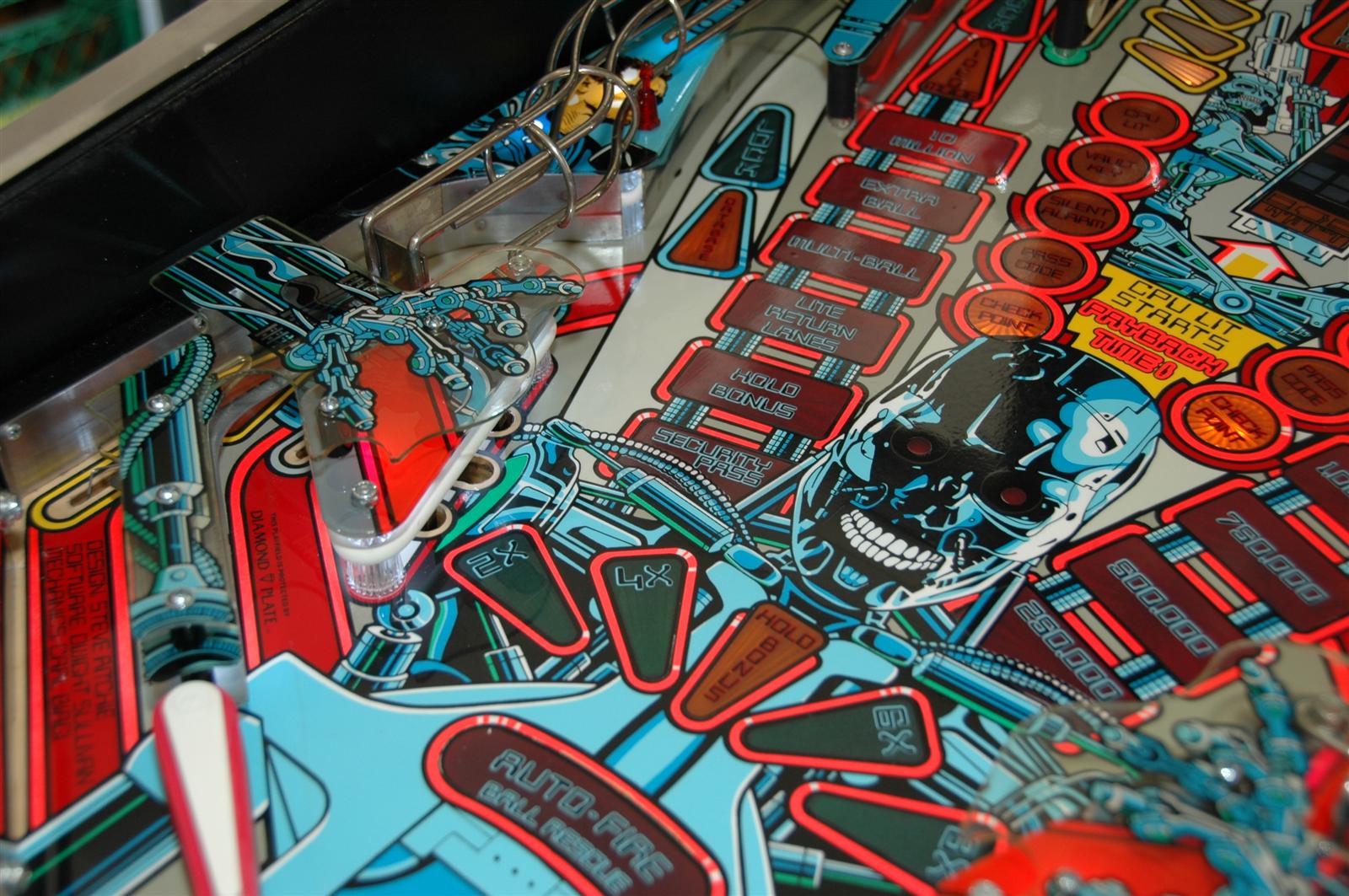 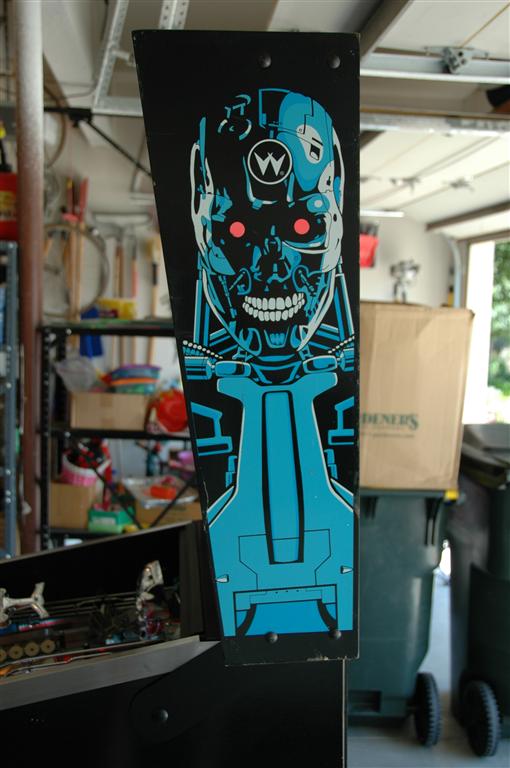 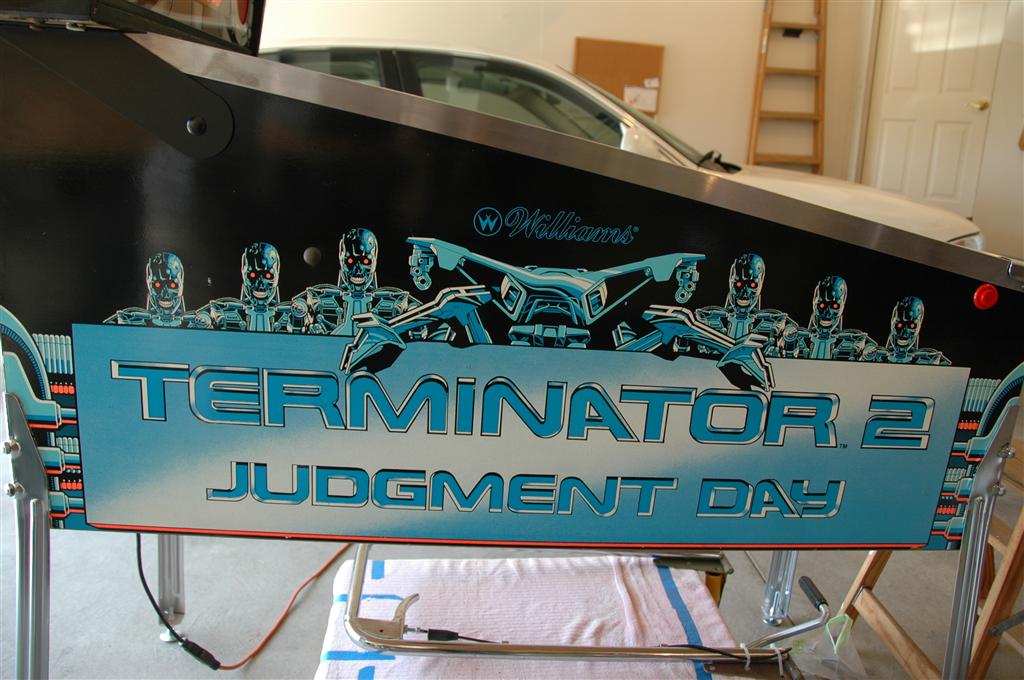 Overall a nice machine that looks and plays great.  It was a fun machine to repair and play.